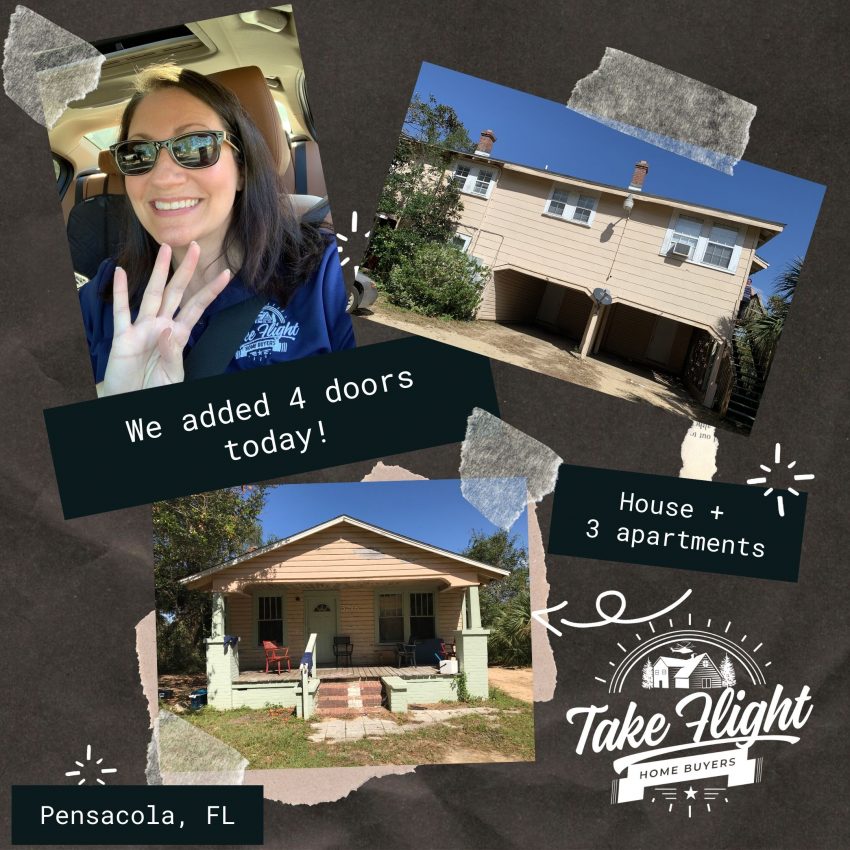 Well, I guess not TOTAL since it is technically true! I mentioned briefly in my previous post that we added a quadplex to our portfolio. Before that, we had one property that we are currently renovating to keep as a rental. So, that’s where the numbers really made quintupling pretty easy. 🙂

On 09/30/2020, a form was submitted on our website by Brian (name has been changed). We called Brian the next day to find out more information on the property. Mike was the one who made the call and he and Brian hit it off right away. Brian is from out West and works as a snowboard instructor. Mike grew up in Utah and was also a snowboard instructor. Talk about easy rapport-building with a new lead! The property he was contacting us about was a triplex that he inherited after his dad passed away a few years ago. Unfortunately, there was also a lot of debt left behind, which needed to be paid off to close the estate. He was looking to sell this property in order to do that. He said in that initial call that he had received a bunch of postcards (ours … along with our competitors!) and was contacting us to see what it was all about. He was thinking of selling the property For Sale By Owner (FSBO), but wanted to see what a cash buyer could offer first. There were a couple of tenants renting the property, but he wasn’t sure he wanted to continue to be a landlord.

We went and took a look at the property the following week. The property consisted of a duplex (occupied) and a small house (vacant). The house had been updated somewhat with new floors and paint, but still had a lot of work to be done to make it livable. Both sides of the duplex were in reasonable shape, however a leak was discovered in our walk through that was going to take a lot more investigation.

Not only did Brian inherit this property, but he also had a quadplex that he was interested in selling. Upon seeing that property, we felt that it would be a great addition for us. The quadplex consists of a free-standing house with a triplex of three apartments. The apartments were in great shape and the house … well, it needs some TLC. Mostly cosmetic — interior/exterior paint, a trash out, and a good cleaning. All of the units were/are occupied. However, in order for us to be able to purchase the quadplex, the triplex would have to be sold in order to pay off the debt and clear the titles of both properties so that they may be sold. Another investor we know purchased the triplex, so we were in business!

We closed on 10/30/2020 and are now landlords! It is a great feeling — we worked hard to find this deal and are super happy with the result. Even better, it is being owner-financed by Brian, which is a really great way to get started in real estate investing with little money. Instead of receiving all cash up front (along with a lot of taxes), he decided that he would prefer a downpayment (~20%) and to receive monthly payments from us, along with interest, on holding the note for the property. That keeps us more “liquid” and able to invest more on the front end to improve the property and allows him to continue having monthly income without the hassles of being a landlord. A solid win-win!

Our first priority is cleaning up the house. It is occupied at the moment, so we will begin on the outside. Definitely needs a new coat of paint and a good cleaning. The apartments behind need new staircases and decking, but other than that they are in pretty good shape and don’t need to be painted. The house and the apartments are currently very close in color (as shown), but that will soon change! We will keep you posted on how things progress. We are excited! 🙂

4 thoughts on “10. How We QUINTUPLED Our Rental Portfolio in One Day!”